Opie Oils would like the say a massive thank you to Team Shand Racing for the amazing race report from there time at the Isle of Man TT 2016! 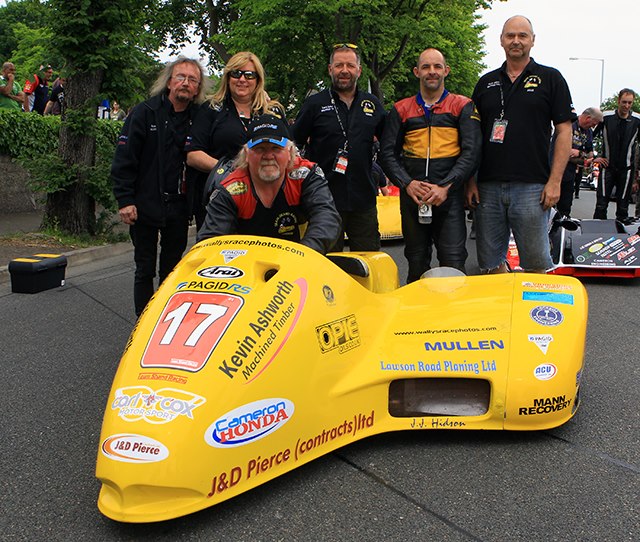 With warm and bright conditions the first of two Sure sidecar races got under way.

Gordon and Phil set off down Bray Hill all was going well, when the race was red flagged due to an incident at Bishopscourt

All sidecar crews returned to pit lane. The race was rescheduled for the full three laps, and the start time was 16.00.

Once again Gordon and Phil set off down Bray Hill. All was good with the bike, but again fuel mapping was a problem all through the three laps. Gordon just had to get on with the race, nothing was going to change the mapping now. Gordon and Phil were all on their own throughout the race, so it was all down to them where they were going to finish the race.

On the last lap driver, Gordon was starting to have problems with his helmet. Gordon explained, “When racing I wear contact lenses. I don’t know what happened, but there seemed to be a lot off wind getting up into my helmet, this caused my eyes to water so my vision was impaired. When we finished the race there did not seem to be anything wrong, the visor was securely closed and nothing missing from the helmet. I will need to see if there is anything I can do for the rest of the next week. And once again we will need to see what we can do with the fuel mapping”

Phil also said, “It was an uneventful race for me, but I am really happy with the result, let’s hope we can do the same next week.

Team Shand Racing was to finish the three lap race in ninth place with a fastest speed of 107.654 mph.

As previously reported, All at Team Shand Racing would like to extend their deepest sympathy and condolences to the family and friends of fellow Sidecar racer Dwight Beare who passed away due to the incident at Bishopscourt earlier today. 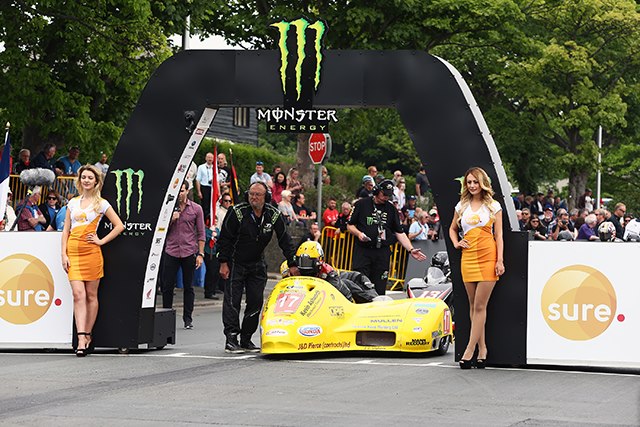 The mist came rolling in from the sea; this led to a long delay to the second Sure Sidecar race on the Isle of Man. Eventfully the mist lifted and it was all go for Team Shand Racing

Gordon and Phil had a good day testing in Jurby, before this three lap race. Adjustments were made and Gordon and Phil felt that the “Shand Racing Chassis” was a lot better. Also for two weeks the pair had been having trouble with fuel mapping, the test in Jurby seemed to have improved this too.

Eventually Gordon and Phil caught and got passed Grabmuller/Wechselberger, it was heads down till the end of the race. On the last lap Gordon and Phil had to slow for an incident, once through this, it was all downhill to the chequered flag, with a race time of 1:02:55.143 and an average speed of 107:939 the pair took tenth place, for another Bronze Replica.

Gordon said “The bike was a lot better today, but I will not be happy until I am battling up at the front, but these young guns are hard to catch”, (with a grin on his face) “I would like to say a massive, massive thank you to all out sponsors, and to all the people who have helped us throughout the last fortnight, without them this would not be possible. I am pleased that we have had two race finishes and pretty good results, just massive big thanks again, to all involved”.

Passenger Phil was happy too, saying, “What a fortnight, it’s had its up’s and downs, but another two finishes, great. A massive thanks to all our sponsors and to all the people who help us. Thank you all very much”.

These two results earned us 7th place overall. Great considering our start position of 20th. We were very fortunate unlike other teams, we took five engines with us and only used one engine for the two weeks while others were blowing up around us.

Team Shand Racing would like to extend their deepest sympathy and condolences to the family and friends of fellow Sidecar racer Ian Bell who passed away due to the incident at Ballaspur. 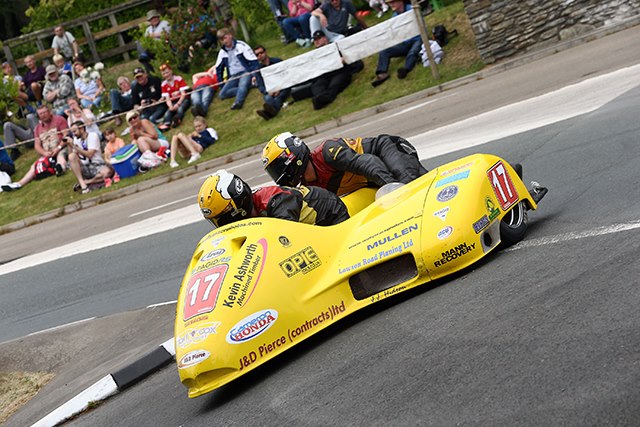 Opie Oils would like to say a massive congratulations to Team Shand Racing! Opie Oils would also like to send our deepest sympathy and condolences to the family and friends of sidecar racer Ian Bell may he rest in peace.