We were very happy to hear from one of our sponsors Ben Harrinson this week who is competing in the NG Road Racing 215 Formula 400. Ben put together a fantastic report for you all to enjoy below.

2015 started off very very cold! I had booked onto the  test day the Friday before as i hadn’t ridden the bike since the last race of 2014, I thought it would be a good idea to get used to the bike again and try and get some set up for the coming races.

The test day went well; I immediately felt at home on the bike and set about getting my lines sorted. I had an ongoing issue with the bike running quite bad below 8k revs but worked around it. At the end of the test day i felt good on the bike and was ready for racing!

The weather was dry but it was extremely cold, tyre temp was going to be a big issue throughout the whole day so i took it easy in morning practice and felt out the grip levels and track conditions.

I started 2nd on the grid for the qualifier race, I managed to get a good start and settle into 2nd place where i stayed which put me 2nd on the grid for the final. I managed to hook the bike up well off the line starting the final but due to the cold conditions i took it too carefully into the first corner and got passed buy Emma Jarman on her ZXR. I set after her as i knew it I could pass I’d have some clear track to try and pull a gap. Unfortunately i made a mistake which let Tim Bradley through on his FZR.

I got a bit carried away trying to make up for lost ground and ended up overtaking under a yellow flag which i hadn’t seen so i finished the race in 2nd place, but got a time penalty which put me back into 3rd.

I was still happy to get a podium in the first race of the season and i knew I had the pace to run at the front.

The weather decided to have a bit of fun with us and absolutely tip it down over night, so now it was freezing cold and wet, grip was going to be a serious issue, it turned into who could stay on the bike rather than who wins the race. To make matters worse it was the first full wet race since my big crash at Cadwell Park in May 2014. I took the practice session very gently as there were already people crashing in the wet conditions.

I started the qualifier 2nd on the grid again and focused on just finishing the race and gaining confidence for the final. I was running in 5th place with Simon and David in front of me, i used them as a target to aim for and slowly started to reel them in, getting faster each lap. I passed Simon for 4th place on the last lap giving me a second row start for the final. 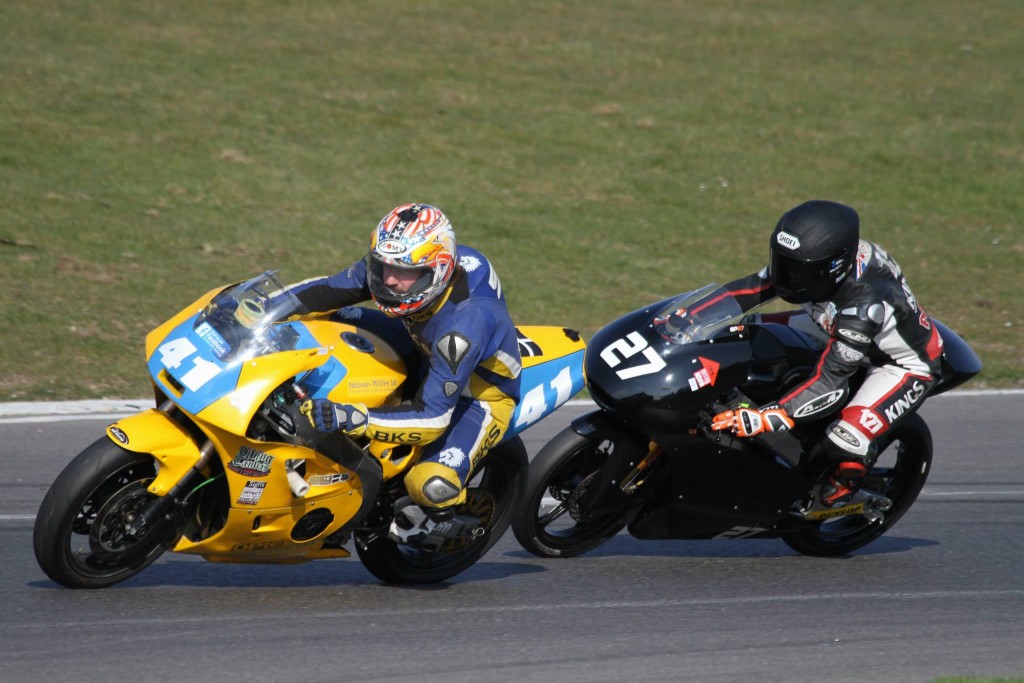 I changed some settings on the suspension for the final and it worked really well, the bike felt really comfortable and i managed to push more than in the qualifier, I was running 2nd for the whole race, at one point i started to close in on Tim Bradley in 1st but caught a back marker at the wrong time so ended up finishing in 2nd place with the fastest lap of the race too.

It was a great start to the season and it’s only going to get better from here, i feel confident in the wet again and comfortable on the bike too. So after round 1 & 2 I’m running 2nd in the championship and ready to fight for the 2015 title!

What a great start from Ben, Opie Oils wishes the same in the next round and wishes him the best of luck for 2015 season.

END_OF_DOCUMENT_TOKEN_TO_BE_REPLACED

In this edition Fuchs reviews 2014 and the success sponsors have had, including the historic 4th title for Shane Byrne in the British Superbike Championship, new of support for the BRSCC 2015 Porsche Championship and tons more, enjoy!

END_OF_DOCUMENT_TOKEN_TO_BE_REPLACED

Riders from FPW Racing had a sucessful visit to Silverstone, all achiveing great results which lead to another great update from the team, enjoy!

After laying out the foundation for a great weekend in Fridays Free Practice sessions Taz went into qualifying buoyed by own performance. During Qualifying Taz tried hard in the very difficult wet conditions setting the seventh fastest lap of the session. The conditions were horrendous with continuous rain, standing water and cold temperatures all combining to reduce grip levels and making it difficult to get the best out of the machines. The second qualifying session of the day was cancelled after the programme suffered lengthy delays due to said weather.

After setting a great pace in morning warm up in the dry but cold conditions, Taz lined up on the third row of the circuit for the penultimate race of the season. Taz, has struggled with his starts throughout the season and Silverstone proved no different after the lights went out. Taz managed to rally during the opening lap and maintain his position as he crossed the line of the first time. On his second lap Taz was able to push the pace
and tag onto the back of the group racing for third that contained team mate Jayson Uribe and Jordan Weaving. 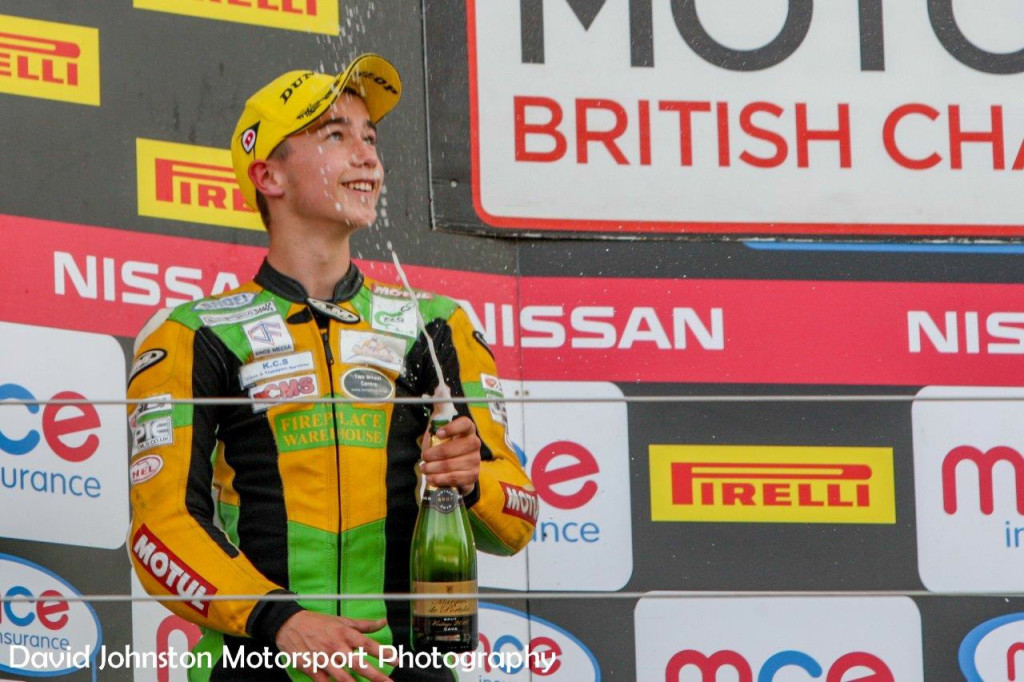 By ending the race in second, Taz has secured his and the teams 2nd place in the championship.

Jayson yet again never fails to amaze! Silverstone may not be the best place to spectate but to ride it has everything, from technical linked corners through to uber-fast flat out bends.

Jayson progressed through the friday sessions in his usual consistent and no-nonsense approach. Posting the sixth fastest time in both sessions Jayson was looking confident to improve for Saturdays qualifying. Conditions on Saturday are what I guess most of the American population believes the UK is like 365 days of the year, Cold and Wet. In reality it was colder and wetter than any preconceived conception could have visioned and for the Californian something far from the norm. This made Jayson’s final placing in the session even more special as he used his ability to grasp a front row slot with the third fastest time in Q1.

With Q2 being cancelled due to the horrific conditions, something Jayson was happy to take, Jayson had secured his first front row start of the season. Sundays warm up was something of an oxymoron, as it was anything but a warmup as the temperatures across the circuit were bitterly cold as Jayson went on to post the forth fastest time.

As the lights went out for the penultimate race of the season Jayson got away well and held his position in the frantic opening corners of the race. Locking bars with Jordan Weaving for the entire race it was a case of give and take as both riders tried to break away from the other. as they battled for third and then forth (after loosing touch with Taz Taylor). The TV cameras were watching the battle closely and Jayson got plenty of coverage as he tried everything, everywhere! The duo were joined by the Dutch race Jorel Boerboom, who added a third dimension to the tussle. With each rider leading the trio a some point on each lap the race it was hard to see who would lead them over the line on the final lap. Unfortunately it wasn’t going to be Boerboom who high-sided and came down hard on lap nine forcing a premature end to the race.

Clearly frustrated by the sight of the red flags Jayson had to settle for fifth overall and the final spot on the Moto3 podium. Jayson had risen well and was lining up Weaving for a final lap manoeuvre that never came to fruition. Once the duct had settled though, Jayson was happy with the result and securing third in the British Motostar Moto3 championship. 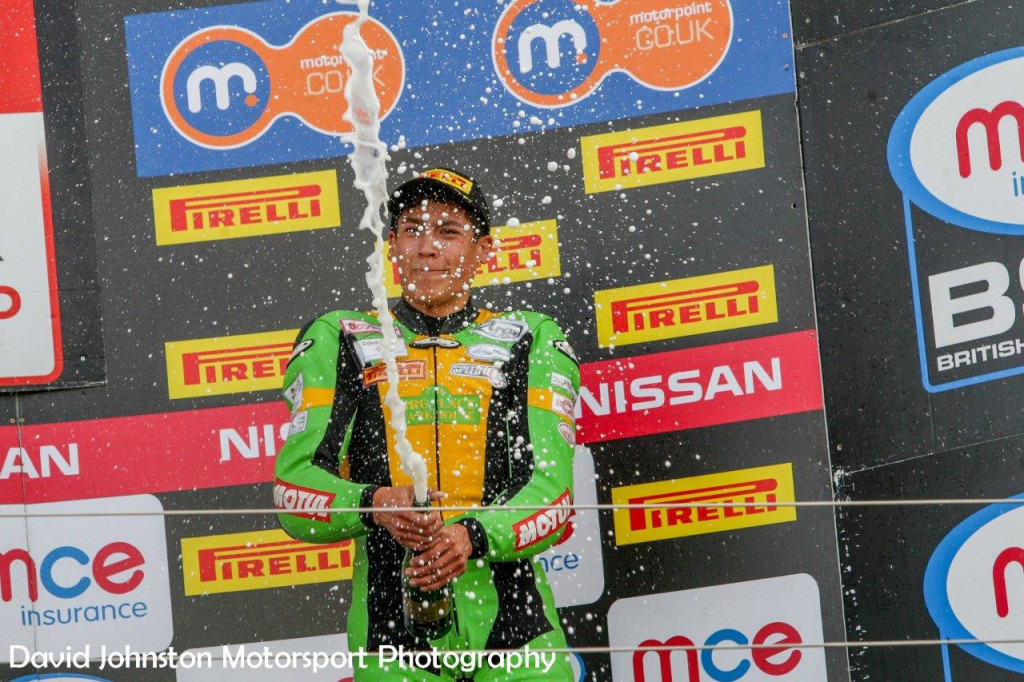 Greg rolled out onto the Northamptonshire circuitfor the first time Friday morning and I cannot explain how difficult it is to learn a circuit and getup to race pace , something Greg has done several times throughout this season.

Silverstones 3.67 miles have a real mixture of track features with everything from tight hairpins like “The Loop” through to super fast complexes like “Maggots” and “Beckets”. 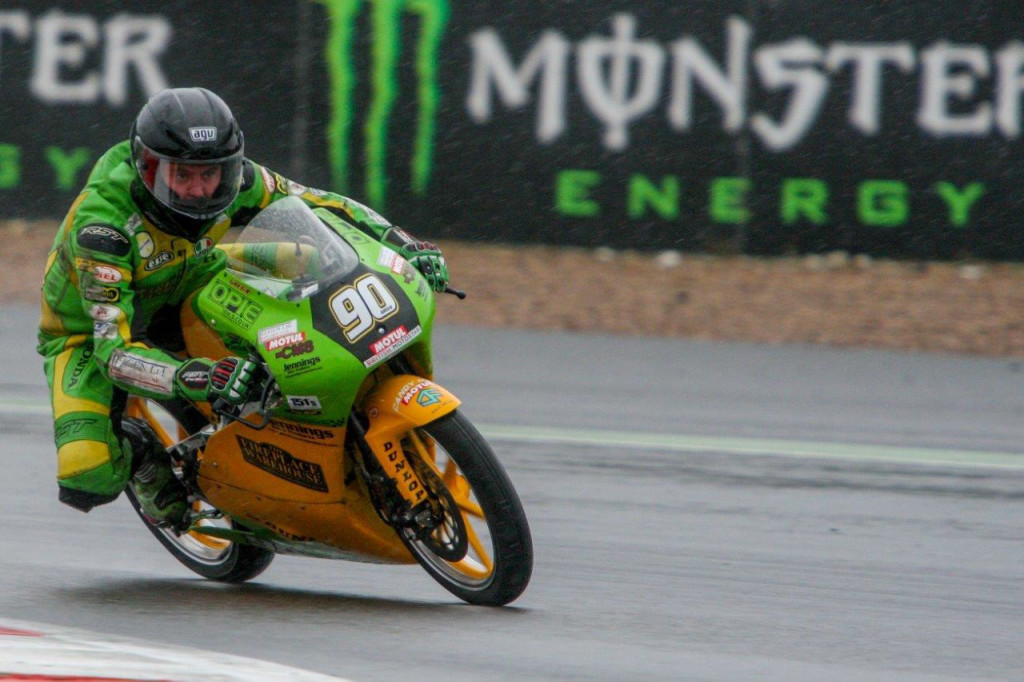 After suffering and electrical issue in the first free practice session after only recoding three laps, Greg had lost valuable track time. Greg built up his pace in Fridays second Free Practice sessions and it was great to see his improvements in time as the 20 minutes of track time came to an end. Ending the second free practice session in 19th Greg had made a huge step forward and was certainly happy with how the day had ended.

Saturdays torrential rain was not what Greg wanted as it just meant Greg now had to learn the circuit over again. Silverstone suffers with a lack of gradient and leads to standing water in several locations around the circuit and it takes time to know where these are. That said Greg did a great job to end the session in 22nd and was looking forward to getting back out in the afternoon to build on this when the news came in that the second session was cancelled due to the conditions affecting the days schedule.

Greg made a good start to the race and was holding 20th position convincingly until and error on lap four caused him to run wide and loose five paces. As Greg tried relentlessly to catch the pack he’d been part of he gradually reduced the gap and managed to work his way back into 19th overall and 9th in the 125GP class. Post race, Greg, was clearly annoyed but not downbeat about his performance. Loosing two sessions was never
going to help Gregs cause and he accepted that this was the best he could of hoped for.

Going to Brands in two weeks time Greg can still take fifth in the 125GP Championship will only 10 points separating him from Elliot Lodge.

END_OF_DOCUMENT_TOKEN_TO_BE_REPLACED

It was a typical Friday afternoon here at Opie Oils but then this class video from Opie Oils sponsor Liam Mellott arrived. Sit back, relax and watch what this lad can do on a jet ski, it’s incredible!

END_OF_DOCUMENT_TOKEN_TO_BE_REPLACED

This morning we received an update from Opie Oils sponsors, Team Lowmilage together with a link to a video of them in action at Extreme Torque Show. Make sure you check it out, it’s definitely worth a watch!