After this weekends of racing Opie Oils sponsored FPW Racing have sent in this fantastic report, enjoy!

Thruxton is a fast, fast circuit, where the riders are expected to average in excess of 100mph for the 2.35 miles lap. Taz had a scary start to the weekend in Free Practice after coming into close company with Jordan Weaving at one of the fastest sections of the track. This didn’t last long though and Taz was up in fifth by the end of the second session on Friday. !

The weather played its part in Saturdays qualifying. Q1 started in perfect conditions and after bettering his lap times with each consecutive lap Taz set a lap time of 1:23.442, just 1.5 seconds off pole position and the highest placed FPW Racing machine. Taz was obviously happy with this and when the weather turned horrific for the afternoon session with torrential rain the times from the morning set the grid positions.!

After loosing out on the second qualifying session and a steady morning warm up practice, Taz went out for the race confident he had what it takes to take his first win in the 125GP class. 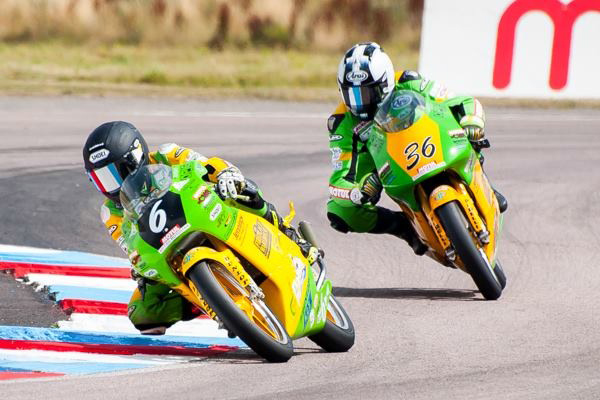 After a half decent start, Taz lost a place into the first series of chicanes. By lap three Taz was part of 5 rider group looking to take the third place in the race. The group that included team mate Jayson Uribe, plus Ed Rendell, James Hobson and the dutchman Mike Brouwers. With Joe Irving and Jordan Weaving having made the break early on, Taz was looking to get to the front of the group and break away, but that was easier said than done. Swapping places multiple times a lap the group of five was great for the spectator but made it extremely difficult to break from the group. Taz had found himself in every position within the chasing pack from third to seventh all in a single lap, such was the enthusiasm of the overtaking. At the start of the final lap Taz was trailing the group int to the final chicane. Luckily though for Taz, Jayson ran wide and messed up the final series of corners. This allowed Taz a better drive to take fifth in the race and second in the 125GP class to Rendell. As a conciliation for not taking the win, Taz set the fastest 125GP lap of the race with a 1:22.087.

After Jayson had pulled together a hard fought result at Brands Hatch after not the best of weekends he was clearly focused to better things in Hampshire.

Fridays free practice went perfectly with Jayson never more than 8 tenths of a second off the fastest lap. This was just the confidence boost that the youngster needed to go into Saturdays qualifying. 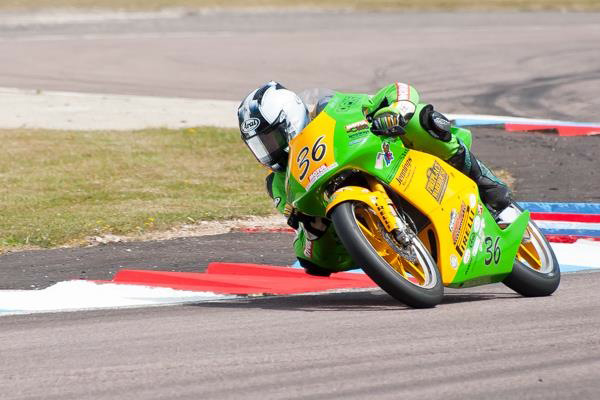 In qualifying Jayson was straight into the groove and was pushing the from his fifth lap of the session. With each subsequent lap Jayson managed to knock off tenths here and there to end the session with 1:23.342.

Going into the race Jayson was more than aware how this race could be won or lost and the slipstreaming effect would be critical. Within the first couple of laps, having lost touch with the leading duo of Irving and Weaving, Jason was looking to take the final spot on the podium in the Moto3 championship. Jayson worked endlessly to battle with a group of 5 riders who were all looking for that very same spot of tarmac. At moments the five riders were all looking to take different lines into the corners after securing different degrees of slipstreaming on the approach, some of which Jayson benefited from and others he didn’t. It was great to watch from the trackside as nothing was gained for free. This was very much a learning experience for Jayson who adapted his lines and technique throughout the race as he noted what had worked and what had not.

Jayson was in the perfect position going int the final lap to take the final spot on the podium having worked so hard to be trailing James Hobson onto the final straight. As Jayson took advantage of the slipstream he chose to take the outside route around his fellow Moto3 competitor. Unfortunately for Jayson, Hobson attempted the same manoeuvre on Ed Randell which left the Californian having to take to the curbs. Unsettled and unable to drive out of the corner Jayson had to settle for 4th in the Moto3 classification. This was a good result for Jayon as he maintains a strong hold of third in the championship.

Greg arrived at the Hampshire circuit having never seen the 2.4miles of circuit before. This is a real issue at a circuit where the average lap is in excess of 100mph for these small capacity machines. 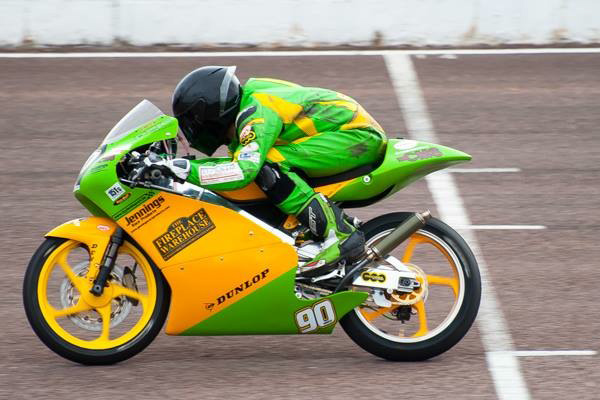 Looking to get as much time on the treack as possible in the lead up to the race Greg built up his pace steadily through the Friday Free practice sessions. Unfortunately his second session was hampered by an electrical issue that cut his session short. For Greg though he was happy with the time he had spent on the circuit and was clearly blown away by the shear speed of the circuit. During Friday night Greg sat down and watched the footage from Taz’s onboard video camera and picked up loads of valuable information to take into Saturdays qualifying.

During qualifying Greg went almost four-seconds faster having used the video to pick better lines, braking points and speeds through corners. This was a great improvement and Greg was confident that he could go faster still in the afternoon session. Any hopes of this materialising ended when the heavens opened and soaked the track for the remainder of the day.

In morning warm-up greg took it steady and played it safe going into the race.

As the lights went out Greg got off to a decent start but the raced never quite panned out as he’d hoped for. Having pushed the pace in the early couple of laps Greg didn’t maintain the pace and found himself in somewhat of no mans land. Greg ended the 14 lap race 17-seconds down on 16th position having averaged a race speed of 93 mph. This was a steep learning curve for Greg and something he can use for the future.

Greg is now 11th in the British 125GP Championship.

Greg Greenwood: “For me this really wasn’t the best of weekends. I’d love to come here and get plenty of track time, build up my pace and learn the circuit more. I just lost too much time through the electrical issue and the torrential rain during second qualifying. This is such a fast circuit you need everything to be perfect and today I wasn’t their – I just didn’t enjoy myself. I know that Oulton is next weekend and I can show my true form there”.